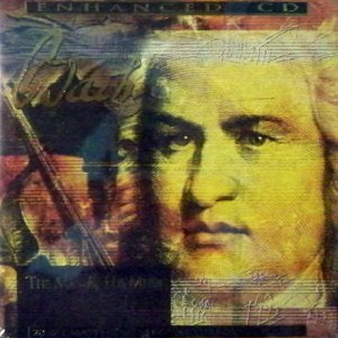 Bach: The Man & His Music

This is one of those Enhanced CDs from the early 1990s that was supposed to be interactive (by letting you follow the score as the music plays on your computer) but, in reality, did nothing but take up your time while you searched for Drivers that still couldn’t play the disc. (And, for some reason, I didn’t throw it away.)

Johann Sebastian Bach was born March 21, 1685, in Eisenach, Germany. During his 65 years, he wrote over 200 sacred cantatas (some of which were also lost); five masses; two magnificats; six passions; six motets (or seven, depending on whom you ask); 518 chorales, sacred songs and arias; 215 keyboard works, including many toccatas and fugues; five pieces for lute; 37 chamber sonatas and 30 orchestral works, including several suites, violin concertos and the six Brandenburg Concertos. Bach came from a large musical family. While most Bachs were instrumentalists, only a few composed. His early years were spent in Eisenach, where he entered the Latin School in the spring of 1692. By the age of 17, both of his parents had died, so he briefly lived with his older brother Johann Christoph.

In 1703, Bach was appointed organist of the New Church in Arnstadt. Unfortunately, not all went well. On August 29, 1705, he was disciplined for calling a student a “Zippelfagottist” (a “nanny-goat bassoonist”) and was told to behave better with the students. (The Bach Reader, David and Mendel, eds.)

The following year, Bach was reproved for other matters, as excerpted from the Proceedings of the Arnstadt Consitory:

February 21, 1706: The organist Bach had previously played rather too long, but, after his attention had been called to it by the Superintendent, he had, at once, fallen into the other extreme and had made it too short. Reprove him for having hitherto, made many curious “variations” in the chorale and mingled many strange tunes in it and for the fact that the Congregation has been confused by it.

November 11, 1706: “If he considers it no disgrace to be be connected with the Church and to accept his salary, he must not be ashamed to make music with the students assigned to do so, until other instructions are given… [Bach is told to] declare himself in writing concerning this matter. [He shall then] be asked further by what right he recently caused the strange maiden [probably his first wife and cousin Maria Barbara Bach, whom he married in 1707] to be invited into the choir loft and let her make music there.

Bach later held positions in other cities. After leaving Arnstadt, he was an organist in Muhlhausen (1707-08). According to the Proceedings of st. Blasius’ Church Parish meetings, he received 85 gulden in salary, plus the following in-kind emoluments:

54 bushels of grain; two cords of wood [one beech and the other oak or aspen]; and six times three-score fagots delivered to the door instead of acreage. (The Bach Reader, 55)

Six of Bach’s children were born during his stay in Weimar (1708-17). Also, many of his keyboard works were written there, including the famous organ toccatas, and some of the popular Brandenburg Concertos.

Bach’s illustrious career continued in Cothen (1717-23), where he served as capellmeister. Prince Leopold, whom Bach served, loved music and wanted the chapel instruments to be in excellent condition. Bach supervised the repair of the chapel organ and personally fixed the prince’s harpsichords.

Several important events in Bach’s life happened in Cothen. The first involved the marriage of his second wife, Anna Magdalena, December 3, 1721. In addition to being his wife, she was a fine court singer. According to an excerpt from the Accounts of the Cothen Capelle, both were paid for their musical services to the prince.

Also that same year, the Brandenburg Concertos were published. This lively set of six concertos was dedicated to Lord Christian Ludwig, the elector of Brandenburg. Lastly, in 1722, the first book of the Well-Tempered Clavier, a collection of 24 preludes and fugues, was composed. “Clavier” is Germany for “keyboard,” but, during Bach’s day, it referred only to the harpsichord and clavichord.

Bach’s writing flourished in Leipzig. All his major vocal works – the B Minor Mass, St John and St. Matthew Passions, six (or seven) motets, two magnificats and many of the 200 sacred cantatas – were composed there. During this time, Bach wrote many instructional works for his pupils, including The Art of the Fugue and numerous canons.

In the 1740s, Bach’s eyesight began to fail due to cataracts. In 1750, he was twice operated on by John Taylor, a British eye specialist. Both were unsuccessful.

Sick and virtually blind, Bach spent the last year of his life fighting the perennial battle of music teacher against city hall. He engaged in heated correspondence with the headmaster in Freiberg, Herr Bidermann, who opposed the “cultivation of music in schools.” Bach felt his moral obligation was to write vehement letters against Bidermann’s position.

By the summer of 1750, Bach’s health had seriously declined. In July, he suffered a stroke and, six days later, died on the 28th.

While, in general, this is a pretty worthless disc (basically six of Bach’s “greatest hits” performed very studiously), the biographical notes are very concise and give a good amount of information. For that reason, I hope this little write up was worth your time.

4 Replies to “Johann Sebastian Bach – The Man and His Music”