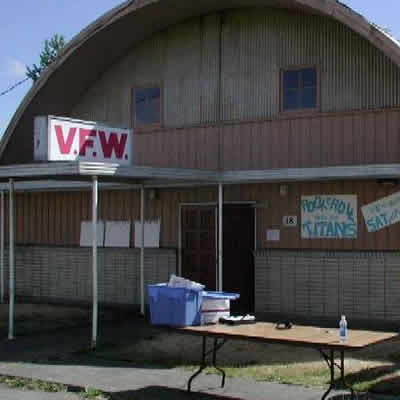 There are now more Goddamned documentary filmmakers in the VFW bar area than actual veterans.

Asshole punk filmmakers with their zippo cameras who just learned there was a World War 2 and think that would “make a great movie”!; dickwad sucking hose farts that think they can stop The War In Afghanistan with a movie at meaningless film festival; scum sucking pricks who think they can find the MIAs in Vietnam.

They all come to the VFW to talk with us experts – US WHO KNOW WHAT A FUCKING WAR IS!  I tell them war is eating a man in Korea.  You’d think we’d be the ones making the movies!

Pete the bartender was “in the shit” in Vietnam as he likes to call it.  He sits there all day like an idiot talking to this rotating circus of filmmakers from the college – all trying to get into his head and find out what it was really like in combat.

VIETNAM VETS DON’T KNOW ABOUT COMBAT! It was all whorehouses and monkey brains for those guys.

[Editor’s note: Manka Bros. & Octogenarian strongly feel that Vietnam veterans served their country as heroically as any of our veterans of foreign wars.]

That’s why they didn’t get a Goddamned parade.  Hell, I wouldn’t be surprised to see Charlie sitting the corner playing on the pinball machine if that damn Pete had his way.  But he took one in the jaw, so I’ll have to give him that.  The man looks like an animal and he’s only 57.

I can only take an hour a day in that miserable place.  I need some place to go to get away from THOSE DAMN KIDS!

Last night, Snotty Scotty turned the hose on Mrs. Aldrich in freezing temperatures.  She claims he was just helping put out the fire in our BBQ that I lit to stay warm during my afternoon outdoor sit.  She’s full of shit (not literally, she hasn’t had a decent movement in years) and I hate her for protecting that little prick!